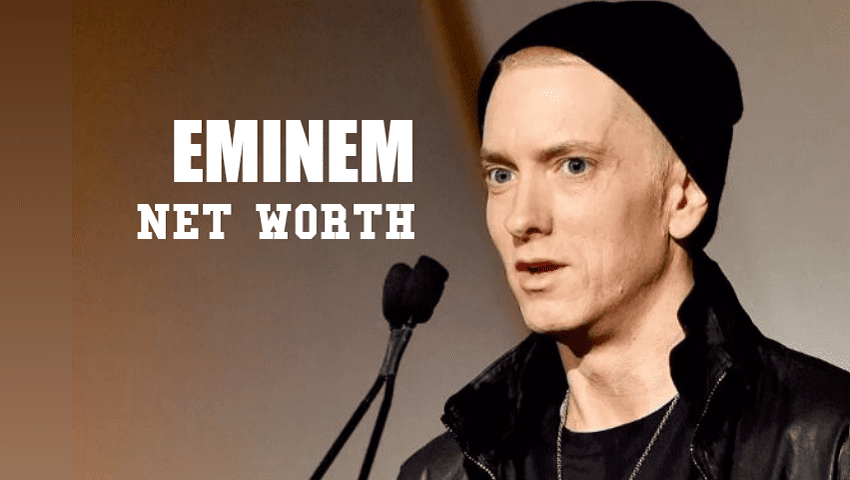 Eminem attributes part of his musical success to Dr. Dre (a rapper, record executive and business mogul). In this guide, we discuss Eminem net worth and life career.

How Eminem Bet the Odds to Become a Best Selling Rapper?

Marshall Mathers went through a rough life when growing up. At the age of 14 years, he began rapping in Detroit based clubs.

Eminem used to skip classes at the ninth grade to rap at events and later dropped out from school to become a full-time rapper.

Since he wasn’t earning enough cash from music, he did odd jobs to sustain himself.

Eminem made his debut in the hip-hop industry as an underground artist. He joined Dirty Dozen (D12), which was a Detroit-based rap group, to further his career. In 1996, he released “Infinite” as his first rap album while pursuing a solo music career.

After taking the runner’s up position at the 1997 Rap Olympics hosted in Los Angeles, California, he got the opportunity to meet Dr. Dre.

The meeting paved the way for Eminem to release “The Slim Shady LP,” executively produced by Dr. Dre. Eminem refers to himself as “Slim Shady” in most of his songs.

The LP sold millions of copies and enabled him to win four MTV Video Music Awards and two Grammy Awards raising the net worth Eminem. “The Slim Shady LP” also helped raise the net worth of Eminem to over 20 million.

“The Marshall Mathers LP,” an album by Eminem released in 2000, set a record in the US as the fastest-selling rap album.

“The Eminem Show,” released in 2002, gained critical acclaim just like “The Marshall Mathers LP.” Eminem went on a brief musical break and released “Relapse” in 2009.

A year later, he addressed the criticisms targeted at “Relapse” on “Recovery,” which is an album featuring hit singles including “Love the Way You Lie” and “Not Afraid.”

According to the Wealthy Gorilla, Eminem’s net worth in 2019 is $210 million.

According to Forbes Magazine, Eminem net worth 2018 stands at $190 million. Eminem makes his money from record sales, tours, and concerts.

In 2013, Eminem put out “The Marshall Mathers LP 2”, a musical project that enabled him to win a Grammy Award for the Best Rap Album. He decided to focus on nurturing rising rappers signed to his Shady Records.

Eminem once did a compilation album with “Slaughter House” members from Detroit. Many rappers including G Easy, Machine Gun Kelly and Chris Webby got inspiration from his career to start rapping.

Four years after taking the break, he surprised his fans with “Revival,” which is a critically-acclaimed album that ranked at number one on the Billboard 200 albums chart. The album got mixed reviews from rappers and bloggers across the globe.

On August 31, 2018, he released “Kamikaze,” which is an album that also charted highly. As of 2018, Eminem ranks among the best-selling rappers of all time.

Despite coming from a humble background and facing many hurdles while growing, Eminem established himself as a real king in the rap industry.